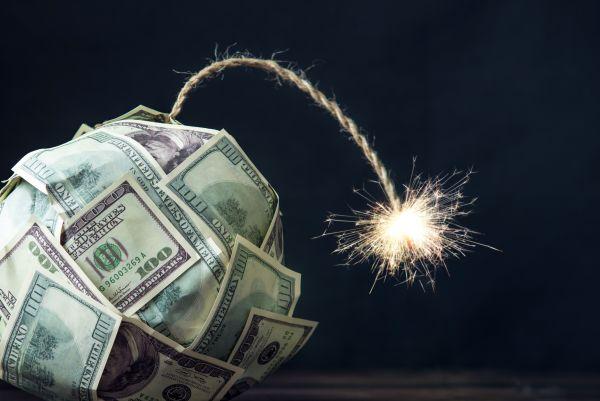 More strategists at major banks are voicing out their opinions about the position of the US dollar today, as well as its longevity. With the recent gold price rally, and fuelled by the ongoing and growing socio-economic issues, the USD’s position as the world’s reserve currency might be threatened.

"Real concerns around the longevity of the US dollar as a reserve currency have started to emerge. […] Gold is the currency of last resort, particularly in an environment like the current one where governments are debasing their fiat currencies and pushing real interest rates to all-time lows," Daniel Sharp, a strategist at investment banking giant Goldman Sachs, was quoted as saying by Bloomberg.

As the level of debt in the US has exceeded 80% of the nation’s gross domestic product, he said that "the resulting expanded balance sheets and vast money creation spurs debasement fears." This, in turn, argued Sharp, increases the probability that at some point in the future, following the normalization of economic activity, "there will be incentives for central banks and governments to allow inflation to drift higher to reduce the accumulated debt burden."

The article went on to state that gold is rallying, and this "highlights growing concern over the world economy." Goldman Sachs raised its 12-month forecast for gold from USD 2,000 per ounce to USD 2,300 per ounce, compared with USD 1,930 today.

The USD dropped to its two-year lows "as investors wagered the Federal Reserve would reaffirm its policies to stimulate the economy this week," the article argued, adding that the US central bank continuing its economy-stimulating measures would likely weaken the dollar. As reported, Joe DiPasquale, CEO of crypto fund manager BitBull Capital, suggested that market participants may want to follow the Federal Reserve’s meeting on Wednesday for policy announcements and keep an eye on gold, silver, and equities to assess market sentiments.

Meanwhile, in the midst of the COVID-19 pandemic, subsequent economic crisis and stimulus packages, China-US tensions, and other factors, "the Bloomberg Dollar Spot Index is on course for its worst July in a decade."

USD performance against major currencies in the past 3 months

Sharp is not the only one to question USD’s place at the throne. Jim Reid, Research Strategist from another banking giant, this one hailing from Germany, Deutsche Bank, stated that fiat money will be a passing fad in the long-term history of money. Furthermore, gold, as a hedge against government money, is outperformed by equities in the long run, according to Reid.

He argued that inflation could become increasingly embedded in our system, resulting in the rising doubts over the sustainability of fiat money.

Had never really thought about that before, how if you believe inflationistas that the official measures massively understate price increases, then it makes gold look even worse as protection against dollar debasement. Heh.

Also, in December 2019, Deutsche Bank Research said that the forces that hold the fiat money system together look fragile. Over the course of the next decade, some of these forces could begin to unravel, potentially leading to the demand for alternative currencies, from gold to crypto, to take off, they said.
___
Learn more:
Why You Should and Shouldn’t Care About Goldman Sachs’ Report on Bitcoin
Washington Warned: Launch Digital Fiat or Say Goodbye to USD Dominance
Bitcoiners Ask: ‘WTF Happened In 1971?’ The Answer Might Shape The 2020s

The Snapshot of The Bitcoin Rally to USD 11,000