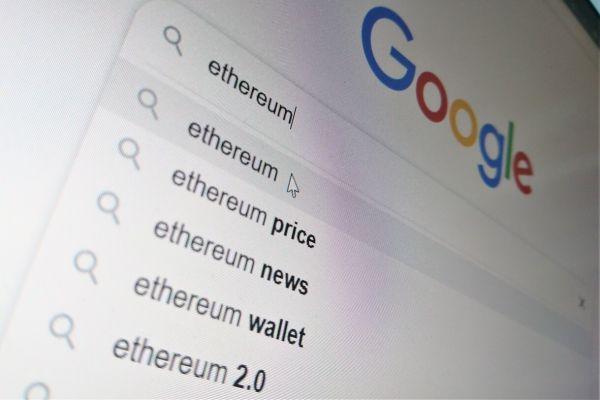 Following a sharp rise in both the price and trading volumes of ethereum (ETH), data from Twitter and Google shows that user interest in this major network has increased even more.

Also, in terms of trading volume, ETH is much closer to BTC than in terms of market capitalization, Google searches and tweets, where BTC is several times larger. However, it seems that Ethereum is getting more and more attention lately.

Google search data shows that search interest for the term ‘Ethereum’ has picked up significantly, rising nearly four times between June 30 and August 3, which is the latest day covered in the usage data from Google Trends. And while the searches for the term ‘Bitcoin’ have grown less than two times over the same time period it is still significantly more popular than ‘Ethereum’.

Also, while search interest in Bitcoin hasn’t caught up with the highs from early May, interest in Ethereum is at its highest for the entire 12-month period covered.

Similarly, aggregated data from the activity on Twitter also shows a more than two times increase in the number of tweets mentioning Ethereum, versus around a 10% increase in the number of tweets mentioning Bitcoin between June 30 and August 5. Also, similarly to the trends on Google, there are a few times less Ethereum-related tweets, compared to BTC. However, ETH mentions have become more frequent over the past three months than at any point since May, while the bitcoin-related twitter activity is still well below levels from May. 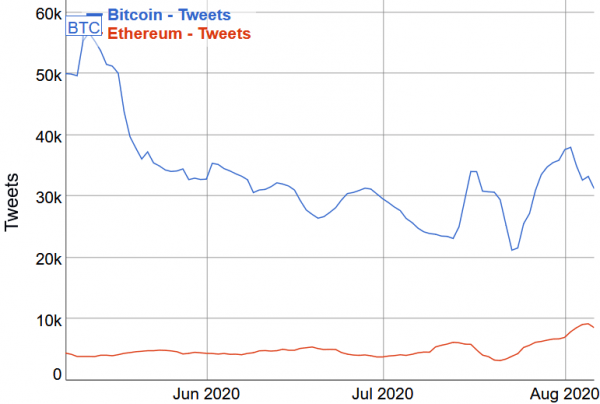 However, not everyone is convinced that the ETH rally will hold up. Mike McGlone, Senior Commodity Strategist at Bloomberg Intelligence, called the latest ETH rally “more speculative” compared to the “favorable demand vs. supply conditions supporting bitcoin,” while also noting that ETH “faces plenty of competition” from other similar cryptoassets.
___